Harry Potter and the Consequences of Magic

All Hallow's Eve and the ensuing feast days are past..It's November, and high time I put my life together again. Harry too, is changing seasons - school fading away for another summer with his aunt and uncle. He's faced his darker self, in a sense, and come away again in one piece. Riddle is an ideal villain in this one book. His Voldemort self is less convincing, and less interesting to me than the conscience-free, arrogant boy facing Harry beneath the castle. Is this why Chamber of Secrets is more unnerving than the rest of the series? Because Harry is still so young, still likeable, and Riddle is very much the image of a boy seduced by darkness, and not the incompetent, almost ridiculous little demon he becomes?


Dumbledore makes a lovely point about choices as well, which Jenna emphasizes nicely. It is a good lesson from author to audience; and I like to think of Rowling's young readers taking it to heart along with Harry's kind willingness to skip right past mentioning Ginny's part in opening the chamber. I imagine eager elementary kids refusing to pass on the gossip of who misdirected the dodge-ball over the fence, or who brought the tuna that filled the cafeteria with that smell, in an attempt to share in Harry's little kindness. But the quote also seems to reflect a sort of 'do as I say, not as I do' attitude in the author, because really, if we were defined by our choices, as Dumbledore says, then Rowling could not have created a character who, as she says in an interview has never loved or cared for anyone at all. A person who has never loved at all is lacking something, not by choice but by nature. He is deficient in humanity and his choices are all limited by this deficiency. It lends to the books a sense that Harry and Co's choices define them, but some people..people in Slytherin for example..are defined less by their choices than their families, their blood, and their abilities. So I end up hoping those impressionable young people don't read too closely or glean too much from the series.

This week I was surprised, and thrilled to see Harry Potter mentioned in the magazine that gives me so many of my favorite cake recipes. Nestled between a recipe for Rhubarb, Cardamom, Pistachio, and Orange cake (which was amazing, even without the Rhubarb), and an as-yet-untried recipe for blackberry whiskey, "Why We Need Magic" caught my eye. It was delightful, and when Harry is mentioned, I found myself nodding in sympathy:

Magic in fiction needs to be more than hocus pocus spells: it must be
difficult, rare, and perilous. It's why - forgive me - I personally don't buy
the magic of Harry Potter, which is attained too easily and lacks
consequences.
~Philip Ball. Why We Need Magic

I can't help but see his point. The magic in Harry Potter is not magic in the true sense, and teaches us nothing about how to approach this "embodiment of  the sublime virtue of hope", with all it's dangers, pitfalls, and beautiful potentialities. More often than not, the magic of Harry Potter is mere 'hocus-pocus spells' - not fairy at all. But then, there are at times that real sense of 'ritualized optimism' that makes the magic real. What do you think, my fellow readers - easy and mundane, or delightful possibilities??
* * * * *

In this book, Ginny comes across as an obvious 2 on the enneagram - opening up to the dangers of possession in order to feel the cozy sense of importance to another. It's interesting to me as I'd never even consider such a thing - too much a chance that the kind solicitude of the diary would turn to mocking arrogance - which is exactly what happened, of course..more reason not to trust your secrets with anyone who might not be what they seem..like friendly diaries or spirit-guides, or ghosts who come re-arrange your bathroom in the night.
Most of all, I end this book grateful that Harry and Professor Dumbledore show themselves to be the opposite of the Diary-Riddle, safe-holders of Ginny's weakness, and nourishing to her spirit and sense of self. It makes me wonder about Christie's comment that Dumbledore may be something of a Reader of Souls..there's argument for it here, it seems..and he is himself reflective enough to make it a possibility. It's definitely something to watch as we move along! Here, his and Harry's  kindness covers over so much that makes me wonder beneath the surface of the tale and lets me close the book fonder than usual of them both. 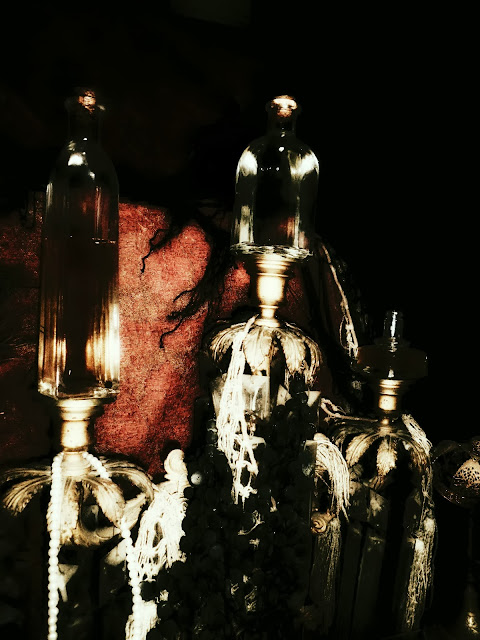