"At twilight, nature is not without loveliness, though perhaps its chief use is to illustrate quotations from the poets."
~Oscar Wilde

I've been neglecting my blog. The dark, November skies are so distracting. I get very little done - less than I'd like anyway. We've been enjoying walks in the Bird Sanctuary nearby. I love to hear the leaves crumbling under my boots and see my shadow stretched out before me.
But I haven't been completely inactive, our soiree went wonderfully, and Thanksgiving is fast approaching - I don't think I've fully realized that yet. And I've been doing autumny things; not early autumn things like apple-picking and leaf-peeping, late autumn things like walks in the wind, curling up with tea and old books, writing letters, and planning parties.
Posted by Masha at 3:28 PM No comments:

"Why was I born with such contemporaries?"
Oscar Wilde

My husband and I are throwing a small soiree, by invitation only. We want to start having a few small parties, with varying little collections of friends getting together formally. We don't wan't to stop having larger parties - but to add and mix up our social gatherings. It's seems to be a popular idea with our crowd, and the first is due to happen next week. It's awkward, however, to begin having invitation parties in a crowd so used to open parties. We don't want to be snobbish, and we plan to include everyone at different times, but in this first soiree, we are inviting a few of our closest friends, we are supplying the food - funky, light fare, and we are arranging the space, with the small size of the gathering in mind. Unfortunately, some of our aquaintences here have never (it seems) encountered a formal party, and don't seem to realize that it is not open to anyone and everyone - it can't be, without being a completely different gathering. How do we deal with this situation - being hospitible but also throwing the party the our guests and we expect? What would you do in such a situation?

Tonight we are headed out to hear a few friends perform in the city. Tomorrow, and Sunday, we expect rain, and cozy at home baking, throwing, writing, and reading.
Posted by Masha at 2:32 PM No comments:

"I don't know what I will become,
nor what I was to be,
I can only replicate the earth's
deep gestures.
I have storm and stillness,
clarity and dusk;
my will is absorbed in growing
and young.."
Rainer Maria Rilke

Outside, dusk is hiding all the dirt and dying leaves - inside, I sit among my candles, incense, and icons; something about autumn evenings calls me to darken my eyes and sit still amid flickering lights and watchful eyes. There is music in the background -there usually is, music makes our home come alive. I like to dance to it - across the smooth wood, in and out of doorways, I like to feel my legs and arms lift and twist against the song. I'm not a good dancer - though my husband tells me I have rhythm - I never really learned, I lack discipline; a few lessons, ballet when I was very young, belly-dance a few years ago, nothing demanding. But I do love to dance.

Tonight we have a book-club meeting, we are discussing Chesterton's The Man who was Thursday. Though the meeting seems like it will be very small, I love book and still hope to get some decent discussion out of it. If you haven't read it, do - it's a fascinating, trippy trip into a Catholic imagination.
Posted by Masha at 4:39 PM No comments: 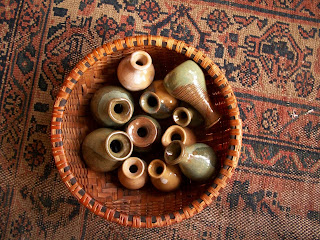 "The best thing would be to work on till art lovers feel drawn toward it of their own accord, instead of having to praise or to explain it." - Vincent van Gogh

My home feels brighter tonight then usual. The blue around me is deep and smooth, I can see none of the imperfections in the walls tonight, only the color, that meets sunflower yellow of the front room and calls the gold of the Icons to leap out into the spaces between the walls. It is a dance of color all around me and I am buried in them - warm, safe, enraptured.

Pots are scattered across the floor as we prepare to list a huge batch of pots for sale. My husband is taking photos. I spent the morning cleaning, tonight our floor is smooth and shiny as amber, clean, and temporarily home to various photo props - a chopstick, numerous books, potted herbs, a jug of wine and scarves. I'm lucky to have him, lucky he takes such lovely photos, and loves taking them - enough to spend his entire afternoon surrounded by pots and props. 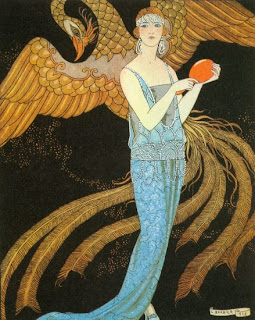 "America is the only country that went from barbarism to decadence without civilization in between.'' - Oscar Wilde

Last Friday I discovered that it is nearly impossible to go out to a late supper in Maine. After attending a concert in the city, we wandered for at least an hour - looking for an open restaurant that was not a bar or a club. After an hour we realized that we had no options - nothing was open; we drove home hungry and ate sandwhiches in bed with tea and oranges. It was delicious, but disappointing - we had intended to go out on the town, and we both enjoy late-night dining.

The experience made me wonder about the new attitude towards meal-times. We generally have four in our home: breakfast, lunch, tea, and dinner. Breakfast is early - as we both wake up before dawn - and simple: toast and tea, coffee and oatmeal, fruit and yogurt. Lunch is the meal I generally miss, my husband eats his at work and I often forget. Tea is our new addition, its lovely to have a specific time to refresh the Zakuska fresh food, hot tea, and little things to munch while planning dinner. Sometimes we have a cup of soup at tea, but generally it's just whatever is out for zakuska. We eat dinner late - usually sometime after seven, and when we're not waking early we often eat after nine, so it was suprising when at ten on a Friday night, no decent restaurant was serving. Why are our mealtimes so limited - I'm hoping this is only a local issue, I miss the freedom I remember having, to go to a show and follow it with a long, late dinner, drinks, and conversation.
Posted by Masha at 3:28 PM 1 comment: