Purity of Heart and Utilitarian Readers

The end of the book is not quite so engaging as the beginning. Ends , for me, never are. I loved the mirror - which only gives to the pure of heart. Magic and mirrors delight me. Mirrors delight me - unless they’re the ones that make my skin go all reddish and add twenty pounds to my chest. Mirrors with secrets are the best of all. And this mirror has secrets. Hidden twists and turns where magic stones can hide and not be found. The mirror bothers me a bit too though; it makes all the other tasks, and Harry’s quest to save the stone itself irrelevant. Quirrel could look and look and never find the stone, he could wish his heart out, smash the thing, and never succeed. So Harry and his tasks are superfluous. And I’m disappointed. I wanted more.

His talk with Dumbledore, though, is enlightening. Jenna’s already shared his words of wisdom. They are good. And there’s a soothing quality to his voice as the plot exposition flows..but even here - so early on - he has the after-taste of utilitarianism, a tendency to use others like chessmen, to manipulate. There’s a similar subtlety and secrecy about him to Snape’s, but sugar coated, and that much sugar gives me headaches. He’s one of my least favorite characters..I don’t like him or trust his motives. And I get the sense that - well meaning as he is - Dumbledore is too often looks at others as tools, and he’s honing Harry here to become his weapon against Voldemort. 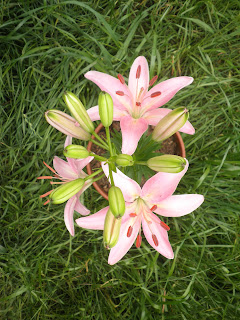 Christie goes deeper into Harold Bloom in her post. The critic who compares Rowling to Tolkien and dismisses them both. If he didn’t have such an obvious loathing for Tolkien and, it seems, myth in general, I’d be more willing to give him some of my sympathies. I can see that Rowling’s not the best writer, not even what I’d call a good writer. She’s a strong story-teller, and at least in her early books, the ‘kid’s-book’ feel covers a multitude of sins. Her characters generally get strong introductions, but she tends to lack consistency.

But Bloom goes on to ask us: "Why read, if what you read will not enrich mind or spirit or personality?"

I can think of a few reasons, mainly the same reasons I’d give for watching reality t.v. (rare, but that’s what hotel rooms are for, right??). Christie contends that Harry is very much enriching all three..and she’s right, in a way. Not only because there are some good themes in the book, but because, well..mind, spirit, and personality are enriched in many ways. One is by reading Good, True, and Beautiful books (which it can be argued Harry Potter is not..I’m not saying the books definitively aren’t, I’m just saying, the argument can be made, and made well by People, Not Me). Another way, is by Not Being A Snob, and being capable of reading and discussing books that lack talent, genius, or any redeeming factors at all..so long as the reading of them is not a near occasion of sin to you. So I read Twilight (sorry Jenna) and I can admit that, if nothing else, it’s given me delightful internet memes to enjoy and a chance to figure out what others love about it; I’ve read Dan Brown..which turned out to be a near occasion of sin by encouraging me to mock Dan Brown incessantly. I read Harry Potter and found I was too harsh in my original opinion..I found things to admire in the books - and the humility of reading a book you’ve dismissed as un-enriching and discoveing it to be otherwise is in itself enriching to mind, spirit, and personality. Because nobody likes the guy who thinks he has all the answers.
Posted by Masha at 6:26 PM