This week we’re focusing a bit on Dementors: 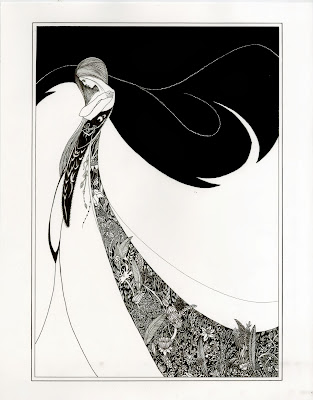 "Dementors are among the foulest creatures that walk this earth. They infest the darkest, filthiest places, they glory in decay and despair, they drain peace, hope, and happiness out of the air around them. Even Muggles feel their presence, though they can't see them. Get too near a dementor and every good feeling, every happy memory will be sucked out of you. If it can, the dementor will feed on you long enough to reduce you to something like itself... soulless and evil. You'll be left with nothing but the worst experiences of your life."

“That's bad enough, but it gets worse. The primary danger of the dementor is the Dementor's Kiss—in which the dementor clamps its mouth over a human's and sucks out the soul, leaving the body alive, but presumably vegetative. The soul ceases to exist.” ~ Jenna 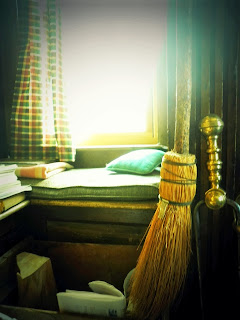 The dementors are an amazing idea. Creepy, swooping, demonic beings of darkness and filth, they are the perfect horror element - tailored to the individual and apparently indestructible. I love their role in this book - to drive Harry into a deeper confrontation with his traumatic past. But the dementors fail in one essential and deeply troubling sense. The ‘dementor’s kiss’ steals the soul of the victim. My frustration with this all-too-powerful ability of evil is that the soul is then reduced to merely a thing - something that can be taken away through no fault of the individual..and I can’t help but be disturbed by such a view of the person. Our souls are not attachments to our person, they are a part of us, and the idea that they can be lost completely merely by being in the wrong place at the wrong time is problematic for the characters and the world overall. It is similar to the sense we get from the books and from the interviews that Voldemort is evil by nature, that he’s never had the ability or opportunity to love and grow in goodness. Evil, we seem to be being told by Rowling, is a specter in the night, waiting to absorb us into itself unless we are powerful enough to deflect it - power, talent, and learning are the keys in this case, not goodness and love. I wish Rowling had given another option, a way of deflecting the dementors that was less learned and more a part of the goodness of the person - if, for example, Neville had been less affected and more dismissive toward them because of his purity of heart and loving character, while Harry’s tendency to rage gave them an ‘in’ to his deeper fears..Or if the dementors could feed on the terrors of everyone equally, but would be unable to suck up the soul of the innocent (cough. SPOILER. Cough)

But Rowling doesn’t give this ‘out’ and while I’m grateful that she realizes and portrays some fates as being worse than death, I wish she’d considered the implications of the free and unfettered taking of a soul. As it stands, her souls seem lacking. I wish I could clarify in my mind exactly what this means for the ‘theology’ of the Series, but all of that is still sort of in flux. The creatures themselves are fantastic, but the failing is so frustratingly complete.

Now there is an explanation from Rowling herself on the subject indicating that the dementors are Depression personified, and Jenna agrees that:

the imagery of a malevolent creature that sucks feeling and hope away from you, that leaves you with a cold void space where your heart should be, that strands you in the company
of only your worst fears and memories—yeah. That. That is what it feels like.

But though the Dementors as Depression image is very good and very workable, Depression alone can’t destroy the soul. It can lead the individual to destroy his own soul, but on it’s own, no, Depression doesn’t have that power. Mental states, no matter how painful don’t have the ability to damn. So I’m not certain where exactly Rowling meant to go with that imagery and I’m hoping you all will want to discuss it ad nauseum, because I do. One thought I’m playing with, to see if I can make it work is The Noonday Demon of the desert fathers..but as of right now, I’m still searching.

So share your thoughts! Do the Dementors work? And what are the “implications beyond bearing” you see in their horrible ability to deprive the victim of his own soul?