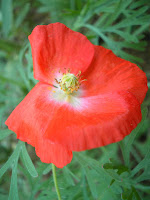 This week we’re going to continue discussion technology and it’s effect on writing with another of Jenna’s suggestions. I tend to write my drafts with a pen. Ideally a very nice, black pen, able to make a nice, dark line on the paper. I don’t generally like lined paper, except in journaling, and hate writing in pencil. I used to type my edited poems on the typewriter, but mine is having trouble now, so I tend to just rewrite. I love handwritten drafts. The look, the feel, the scent, and all the crossed out bits that I can rediscover later and edit back in. A computer doesn’t allow me to have the crossed out sections, so when I write on the computer I tend to delete whole pages in a fit of simplification only to discover later that I really wanted one partially remembered bit back. Those are my reasons for writing by hand. But do I think it has an impact on the final product, in general, not for me specifically? I don’t know, I think it must, but I wouldn’t go so far to say the impact is good or bad. I can’t usually tell the difference between a typewritten or handwritten final draft. The impact is less on the outcome than the process. I think typing everything on the computer leads to a more transitory relationship to the words themselves, they are so easily deleted, they haven’t ‘bled’ on the page the way written words do, but that impermanence gives the writer more freedom while editing to completely transform the piece.

I do wonder, in my more judgmental moments, whether writing solely on the computer has contributed to the huge number of badly written, barely edited books coming out on the market. I know I edit less when I see my writing on a screen instead of a page, and I know that the ability to put so much done, so quickly, with no fear of running out of space has encouraged me to over-write at times. But I don’t know how much of this is due to my own personal weaknesses as a writer and how much is due to the influence of technology. I’m interested to see the response here, because I don’t have a set opinion, so much as a collection of muddled feelings and impressions. 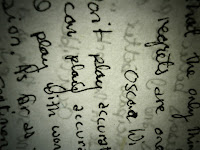 What do you think? Do we need to reclaim the written word, abandon our computers and return to a place without screens and humming monitors? I don’t think so, but I would argue for keeping the texture of writing alive in some way, in typewriters, inky pens, and coffee stained pages that can be finalized on the computer, but have lived in some way without it.
Posted by Masha at 6:05 PM