In our trip though Harry’s third year at Hogwarts we’re full in the middle of all sorts of internal drama at the school. Sirius Black has broken in, done nothing, and broken out again while everyone is conveniently out of the way (good thinking for someone hunting information, not so good for snatching Harry) - but Snape is hinting (carelessly within-earshot of Harry & Co.) that someone on staff is helping, and since Lupin and Hagrid are the only new-appointees, it’s obviously Lupin he’s referring to (so you’re not SPOILED, right?). But why do teachers at Hogwarts never have important conversations in private?

I sort of love Snape’s chance at Defense Against the Dark Arts..finally he’s teaching his subject and it must have been so frustrating for him! (Honestly, if I were subbing for a class like that, I’d be kind of crabby too..how hard is it to just 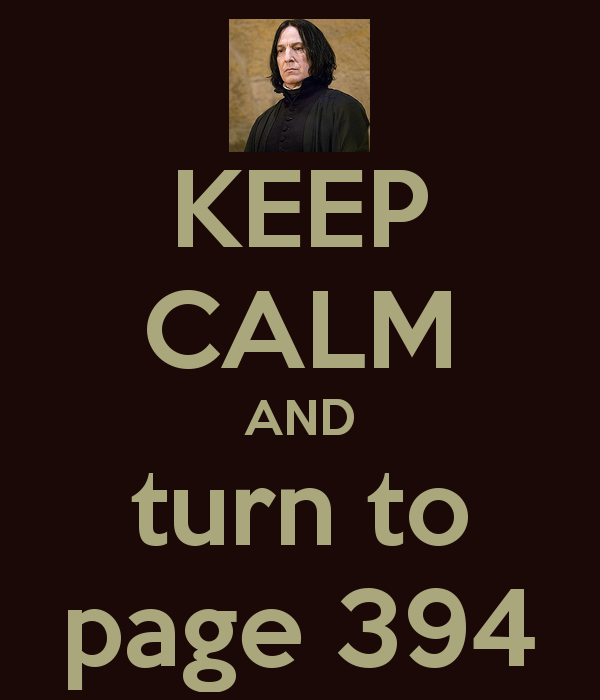 In her post last week, Jenna brings out the problematic ambiguity of Lupin’s encouragement to Harry in chapter 8, Harry tells Lupin that he expects the boggart would turn into a dementor for him, and Lupin gives this bit of empty encouragement:

“I’m impressed…That suggests that what you fear most of all is - fear. Very wise, Harry.”

Does it? Is it? I'm doubtful on both counts. Jenna writes:

I'm not sure what to make of this statement; to me, it sounds a little bit like "Seize the day" and other bits of popular aphoristic wisdom: helpful enough for certain people under certain circumstances, but not necessarily true in the transcendental sense.

And like her, I find it hard to feel the truth of Lupin’s little affirmation. For a few reasons:

I don’t see anything wrong with Harry’s fear of the Dementors - I actually love that he thought of the Dementors and not Voldemort (sometime more immediate, more directly threatening to him right now) - it makes sense that Harry would fear something that is a current threat.  I appreciate Lupin in this scene - he’s open, honest, caring, and respectful..he doesn’t shift his eyes and avoid the question; he just answers Harry’s question and it’s a wonderful indication of the character Rowling seems to be building in Lupin. But the comfort offered is weak and meaningless.

Snape understands that hard truths have to be said..Harry should have come to him and said, "I'm most afraid of dementors." Snape would have given Harry something real to fear - Cedric Diggory goes on to become a whiny, emo, puddle of self-loathing and body-glitter. Now, work up a spell against that.