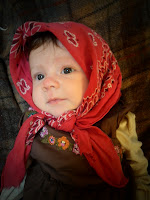 I'm thrilled with the responses I've gotten to my post on the words that define us: masculine, feminine, feminist, etc, and thrilled that the responses are so polite and so different. The most interesting part of the discussion for me is how varied the reactions to the word "feminist" are. In one of my discussions, a woman defined herself as a feminist because she expects her husband to work so that she can stay home with their children, do heavy work for her, and support her as she does "womanly things" which led me to post some thoughts on a woman's role "in the home" on Piekno. In the same discussion, another woman defined feminism as the desire for equality in work, wages, and education, and in our blog discussion, Laura, defined feminism as simply, "people are people, don't be a jerk" while both Jenna and an anonymous commenter considered feminism in a harsher light, as women who don't seem to like men and masculinity much.

When I think of feminism, I think of Kathleen Norris, and because of her I also think of the Virgin Martyrs of early Christianity. I think of my sister and her husband - who makes every family gathering more peaceful and pleasant, of my grandmother, my great uncle, and of many good friends from school. I don't think of man-haters, in part because of the men I know who are non-self-loathing feminists. I also don't think of myself.  I can't get past the impression the word gives, of being in favor of one sex over another. Though the feminists I've known don't hold to that understanding, the basic definition is hard to ignore.  In practice, unfortunately, I see more man-bashing in non-feminist circles, which saddens me.  I also noticed that the sort of feminist I generally encounter is incredibly supportive of my life at home, I've never felt in any way dismissed by them for being "just a stay-at-home wife/mother/potter/writer" with no career goals whatsoever, though they are typically viewed as extremely against women in the home. I think though, feminists are primarily against women staying home because they believe it is the only way to be a good wife and mother. As I watch women I know work, raise children, and hold their homes together, I wonder how they do it (I can't even manage to finish my road) but when I see their children happy, healthy and well-loved, when I see their husbands supported and supportive, I can't fault them for adding a career to the mix and living at a faster pace than I choose to.

So what am I? A woman who stays home with her daughter and dog, lifting heavy things when life demands it, scrubbing floors, tending the fire, and drinking too much tea while pots dry. Staying far away from labels that can't quite fit.
Posted by Masha at 5:23 AM