"Once you label me, you negate me."
~Soren Kierkegaard

It's nice, actually, to be taking a break this week from the discussion that's been going on between Jenna St. Hilaire, Mr. Pond, and myself. I'm glad to have this week to simply be, and to reflect on the discussion that's happened so far. She left for the week asking "What is beauty?" and that is something, perhaps that we ought to have settled on at first, it might have clarified our earlier discussions, it might have removed some of the uncertainly that led to disagreement.

What is Beauty? Simply speaking, Beauty is the visible form of the Good.

Mr. Pond, who seems to be under some illusions about my philosophical ideals will be somewhat surprised to learn that this definition is not essentially Platonic, but Catholic (in both senses of the word). While there are aspects of Plato in Catholic thought, Plato is not the essential, he is absorbed or dismissed according to his ability to fall in with what is understood to be True. Plato has lovely ideas, but he's been eclipsed. The tendency to say, this is Platonic thought, and respond to it as such makes true discussion impossible, it is a response to an impression from the writing, not what is actually written.

I am impressed so far in this discussion with the continual search for agreement in both Jenna and Mr. Pond. They obviously enjoy the discovery of common ground, and the building up of that common ground until it becomes a beautiful place, a haven against disagreement. Agreements are lovely, and in this past discussion, Mr. Pond has gone to great lengths to attempt a reconciliation between Jenna and my definitions of art. He's decided that it is entirely a semantics disagreement, due in part to my Platonism I'm sure. But not being a Platonist, and not longing for agreement at the expense of my own ideals, I have to reject his efforts. If art is  merely communication, if every bit of banality and ugliness is on some level, art, then art itself has no inherent value, no meaning, and no purpose. It does nothing to raise up man, it is a non-definition. Jenna's inclusive concept of art is in complete opposition to my own, and, by being too inclusive, fails to give non-art communications an opportunity to shine in their own sphere. Defining a Taylor Swift song, or a "penny-dreadful" book as art instantly relegates it to the level of "bad art," while allowing it to be itself: a fun pop-song, or badly-written but enjoyable commercial fiction, gives it the opportunity to succeed on it's own level.

Jenna and Mr. Pond will have to forgive me for being less than determined to agree than they. I've never been particularly uncomfortable with disagreement - especially written out disagreements, that can be edited, read, reread, and continually developed. I am not disagreeing for the sake of disagreement, but in some sense, out of a sense of self-preservation: If I agree with Jenna's terminology, I am agreeing that my artistic vocation is meaningless and non-existent, for if everything anyone ever says, writes, or does falls under the umbrella of art, then the term "artist" is as meaningless and empty as the term "art." I can't accept that, and in an attempt to form an agreement, I doubt either of them want me to agree with that idea, though it comes naturally out of Jenna's definition.


It's nice having a break in the discussion, a chance to look back and re-collect my ideas, to bring out some background thoughts that have been collecting in my mind these past few weeks. I'm looking forward to picking up the discussion again next week, with mediocrity and the abundance of Kierkegaard quotes that go with that issue. No one discusses mediocrity like Kierkegaard, except maybe Christ. Maybe. 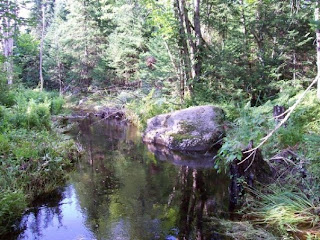